Spindles are best known for sending half of the DNA to one daughter cell, and the other half to the other daughter cell.  While there are important differences, this is true for both mitotic and meiotic spindles.  The general idea is that during metaphase of mitosis or meiosis, the spindle has all of the DNA aligned in its middle.  Then, in anaphase, half of the DNA is moved to one end (or “pole”) of the spindle and the other half is moved to the other end of the spindle (Spindle figure 1; spindle movie 1).  The separation is finalized by cytokinesis, which splits the cell in two.  If the spindle fails to do its job properly, the daughter cells will end up with either too many or too few chromosomes, a condition known as aneuploidy.  Aneuploidy is both associated with and thought to be a cause of many different cancers.  Thus, understanding how spindles form and function is essential to understanding cancer.

Discovery of a microtubule-binding myosin

Spindles are generally thought to be assembled predominantly from microtubules, microtubule-binding proteins (including kinesins and dyneins which are microtubule-based motor proteins) and, of course, chromosomes and chromosome-binding proteins.  A few years ago, however, we sort of backed into the idea that F-actin and F-actin-based motors (myosins) might be important for spindle assembly and function as well.  That is, we were generally interested in microtubule-F-actin interactions in part as a result of work done in the lab by Julie Canman (see http://jcs.biologists.org/content/110/16/1907.long) and Jenny Sider (http://jcs.biologists.org/content/112/12/1947.long) in the late 1990s as well as the results of work done in collaboration with Clare Waterman-Storer slightly later (see http://jcb.rupress.org/content/150/2/361.long).  In parallel, Anna Sokac was characterizing myosins expressed in Xenopus oocytes.  Anna focused on myosin-1C (see the exocytosis and endocytosis portion of the research areas on this site and the paper published in Developmental Cell; http://www.sciencedirect.com/science/article/pii/S1534580706003959) but also noted that Xenopus myosin-10 might have the potential to participate in microtubule-F-actin interactions.  This possibility was pursued by Kari Weber.  Kari cloned and characterized the full length Xenopus myosin-10 and found that the region of this protein that contains the Myth4 and FERM domains (specialized portions of the protein) can indeed bind microtubules (Spindle figure 2).

Spindle figure 2—Binding of the Myth4-FERM domain of myosin-10 to microtubules as assessed by cosedimentation with microtubules.  In this experiment, different proteins are mixed with purified microtubules, and then the mixture is subjected to centrifugation.  The microtubules go to the bottom of the tube after centrifugation and pack into a pellet.  Everything that is not in the pellet is considered the supernatant.  If a protein binds to microtubules, it ends up in the pellet, if it does not, it ends up in the supernatant.  At the top of the figure is a schematic diagram showing the primary structure of myosin-10.  At one end (the amino terminal end) is the motor domain–the part of protein responsible for binding to actin filaments and ATP and which can drive movement relative to actin filaments.  At the other end (the carboxy terminal end) are the Myth4 and FERM domains.  In the middle of the figure are pictures of immunoblots.  These allow one to follow the relative amount of different proteins in different samples.  The numbers on the left of the blots indicate molecular weights, the labels at the top of  the blots show which fractions are being analyzed (P = Pellet, S = Supernatant), the labels on the right of the blots indicate what is being followed (a-GFP means that the distribution of GFP is being followed and a-tubulin means the distribution of tubulin is being followed) and the labels beneath the blot serve as a key to allow one to better understand the structure of the constructs used in the experiment.  If this seems complicated, all you really need to know is that a relatively fat, dark band on the blot means that there is relatively more of the protein in question.  Thus, in the first two lanes of the blots, wherein GFP-alone (a control) was mixed with microtubules, the GFP does not end up in the pellet where the microtubules are (as revealed by the abundance of tubulin in that sample) indicating that GFP alone does not bind to microtubules.  Likewise, In the sample where GFP-fused to the FERM domain was mixed with microtubules (the last two lanes of the blots), the GFP-FERM does not end up win the pellet indicating that the FERM domain alone does not bind microtubules.  In contrast, some of the GFP-MyTH4 ends up in the pellet and even more of the GFP-MyTH4-FERM ends up in the pellet indicating that the former can bind microtubules while the latter can bind microtubules even better.  For details, see http://www.nature.com/nature/journal/v431/n7006/full/nature02834.html. 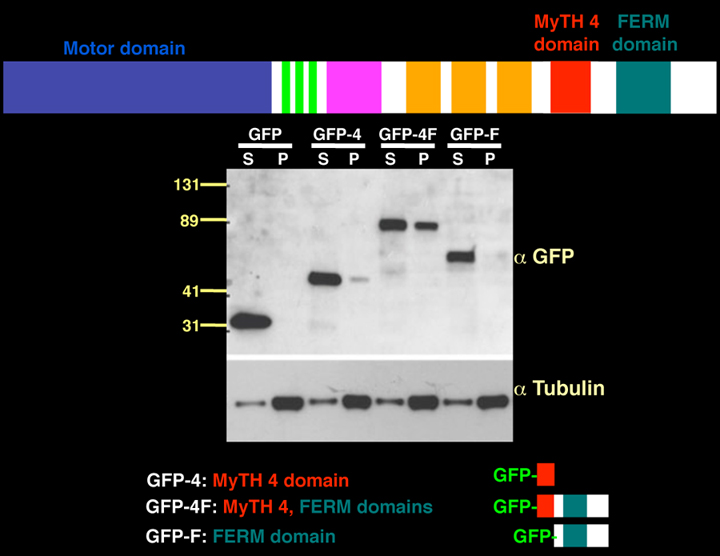 In collaboration with Richard Cheney’s lab (UNC-Chapel Hill) Kari went on to show that myosin-10 not only binds microtubules, but localizes to meiotic spindles (Spindle figure 3) and is required for normal meiotic spindle assembly and function (for more details, see the paper published in Nature: http://www.nature.com/nature/journal/v431/n7006/full/nature02834.html).

Spindle figure 3—Myosin-10 localization to the meiotic spindle.  This figure is sort of hard to understand but it looks cool so I put it in anyway.  For ones that are easier to understand, keep reading below.  This one is an immunofluorescence view of a meiotic spindle generated to show the spindle as if we had peeled the plasma membrane away and the spindle was stuck to the peel.  Red is microtubules, blue is actin filaments, and green is myosin-10.  It looks sort of like a cauldron.  The chromosomes cannot be seen, but they are in there.  The myosin-10 colocalizes with some, but not all of the microtubules and some, but not all of the actin. 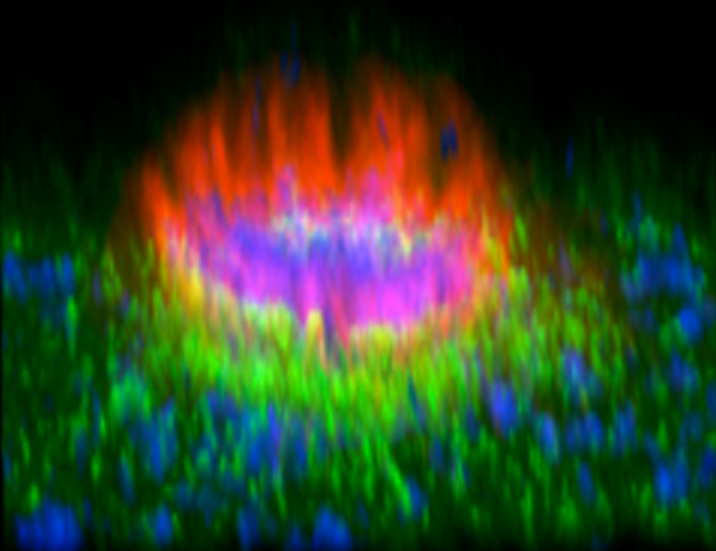 Is myosin-10 important for mitotic spindle assembly and function as well as meiotic spindle assembly and function?  This question was approached by Sarah Woolner.  Sarah first demonstrated that myosin-10 localizes to mitotic spindles in Xenopus embryonic epithelial cells (Spindle figure 4) and then went on to show that if it is knocked down (ie if the levels of myosin-10 protein are reduced), a variety of severe phenotypes result:  the spindles lengthen, they develop extra poles, they display slower-than-normal movement, and they take far longer than normal to transit through mitosis (see the paper published in the Journal of Cell Biology:  http://jcb.rupress.org/content/182/1/77.long).  These phenotypes are shown below in Spindle figure 5 and Spindle movies 1 and 2, all prepared by Sarah Woolner.

Spindle figure 4–Localization of myosin-10 to mitotic spindles.  Immunofluorescence analysis showing the distribution of myosin-10 (green) with respect to spindle microtubules (red) in metaphase and anaphase.  The myosin-10 is concentrated at the spindle poles.  Myosin-10 is also concentrated at the plasma membrane of the cells, but these images are cropped such that the plasma membrane is not visible.

Spindle figure 5—Knockdown of myosin-10 results in several mitotic spindle abnormalities in epithelial cells.  The top row shows a control spindle, the bottom two rows show spindles from epithelial cells in which myosin-10 has been depleted.  The left panels show the microtubules, the middle panels show the DNA and the right panels show the two merged but in different colors, with the microtubules in green and the DNA in red.  The yellow arrows indicate the spindle poles.  Note that in the cells subjected to myosin-10 knockdown, the spindles are longer and have extra poles.  In the bottom panels, a spindle that has gone through several rounds of failed mitosis is shown; it has many spindle poles (see http://jcb.rupress.org/content/182/1/77.long). 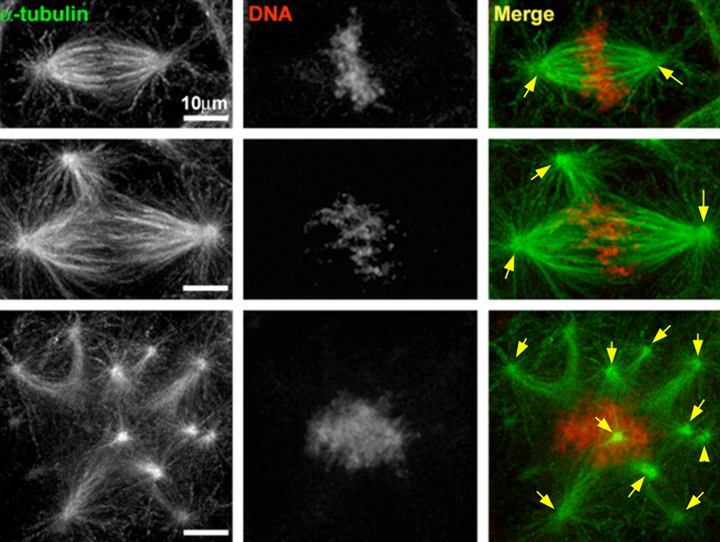 Spindle movie 1—A time lapse movie showing chromosome (DNA) separation during mitosis in control epithelial cells.  Microtubules are green, DNA is red, the cell membrane is blue.  Note that in addition to separating the DNA in anaphase, the spindles undergo movement from side-to-side prior to the onset of anaphase. This is normal spindle behavior.

Spindle movie 2—A time lapse movie showing microtubule dynamics during mitosis in epithelial cells subjected to myosin-10 knockdown.  Several abnormalities (relative to controls) are obvious:  the spindles become elongate after formation and then form extra poles.  The spindles are also very slow to begin anaphase and when they do so, they do a crappy job of it.  Finally, the spindles do not undergo the lively side-to-side bouncing around the cell evident during metaphase in the control cells but instead move slowly around the cell edges.

If myosin-10 is important for mitotic spindle assembly and function, does that mean F-actin is as well, since myosin-10 is an F-actin-based motor?  Sarah also addressed this question in her study.  First, she reduced F-actin levels and showed that this manipulation changed spindle behavior in vivo.  Second, she imaged F-actin in living epithelial cells during mitosis and found that actin filaments are consistently associated with the mitotic spindles.  An example of this is shown in Spindle movie 3.

Spindle movie 3—A time lapse movie showing spindle-associated F-actin.  On the left both actin (green) and microtubules (red) are shown; on the right, just the actin is shown.

Are these results likely to be important just for mitosis in frog epithelial cells or for mitosis in general?  In a review recently published in Developmental Cell, we (Josh Sandquist, Angela Kita and Bill Bement, to be specific) argue that there is good reason to think that roles for spindle-associated F-actin and myosins may be important for mitosis in all cells (see http://www.sciencedirect.com/science/article/pii/S1534580711003108). For now, we are focused on trying to understand how, exactly, F-actin and myosin-10 contributes to spindle assembly and function.