We left the cytokinesis section with two questions: 1. How does the cell manage to generate a Rho zone when microtubule access to the cortex is experimentally curtailed? 2. How, exactly, is GTPase flux implemented?

The answer to both of these questions may come from a process that we call “Cortical excitability” an example of which is shown above. If you want the details, check out https://www.nature.com/articles/ncb3251 which represents the product of Bill’s sabbatical work with George von Dassow and a collaboration of our lab, George’s lab, the lab of Andrew Goryachev (University of Edinburgh) and the lab of Ann Miller (University of Michigan). If you do not want the details, but still want to know more, keep reading.

What is cortical excitability? There are many ways to describe it, but the descriptions are not much help if you have not seen it. Since the movie above, while interesting, is somewhat complicated, we will start by walking through some simpler examples.

If you film actin filaments (F-actin) in Xenopus embryos at sufficient resolution and speed you will see that traveling patches of F-actin are present throughout the cell cortex. An example of this can bee seen below in excitability movie 1.

The patches of cortical F-actin move randomly and look as if they are waves generated by actin assembly and disassembly, rather than transport of F-actin in the cortex by motor proteins. This point can be tested by experiments in which embryos are simultaneously labeled with two different F-actin binding proteins, one of which binds F-actin quickly (LifeAct) and one of which binds F-actin more slowly (UtrCH) and each of which are labeled with a different fluorescent protein. As shown in the movie below, there is relatively more LifeAct (gold) at the front of the waves and relatively more UtrCH (blue) at the back of the waves, as predicted if actin assembly occurs preferenntially at the front of the waves and disassembly occurs preferentially at the back of the waves.

Although the wave patterns are complex, they can be simplified by converting them into kymographs (aka space-time plots). A similar method commonly used to display changes in location over time is to break a movie up into an image montage. A well constructed montage can tell the whole story of the movie as a still image, however, it is not an economical use of space and the scaling required to view a particularly long montages would obscure the fine details within individual frames. To illustrate this, consider the simple animation, and its corresponding montage, seen below.

In this montage, we are only displaying every third frame, and it is still annoyingly long. Instead, we can generate a kymograph. A kymograph is in essence a montage made using a very skinny strip of a movie, often just one pixel wide. In the resulting kymograph each row of pixels represents a single frame from the original movie. Thus, much like the image montage above, the kymograph displays distance on the horizontal axis, and time on the vertical axis. In the animation below, we will use the region along the dashed line to generate a kymograph. Here we see that the teal ball is moving relatively quickly at the beginning of the animation and therefore the location of the teal streak in the kymograph moves a large distance (on the horizontal axis) in a relatively short period of time (on the vertical axis). Meanwhile the magenta ball is stationary in the beginning of the animation, and so the magenta streak doesn’t move at all until the teal ball collides with it. After the collision, both balls roll apart from each other. Again, this can be seen in the kymograph by change in direction of the teal streak and the movement of the magenta streak in the opposite direction

If we turn this tool back to the movie of the wave patterns, seen below, we can see key features of the wave patterns that may have escaped us in the full length movie.For simplicity, a region (contained within the dashed line below) is displayed to the right of the kymograph in excitability figure 1. Remember, because kymographs display space on the horizontal axis, and time on the vertical axis, this region represents the change in fluorescence over time in just a small area of the cell. What is particularly noticeable in this region is that every wave leaves a black space in its wake that is never occupied by another wave for a certain minimal period of time. Because that length of time (as defined by the width of the black region) is relatively consistent, it follows that a given part of the cortex may be competent to support a new actin wave only after some period of time has passed since the last wave. 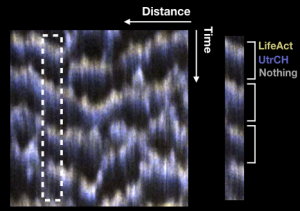 Another important wave behavior is evident from watching movies and looking at kymographs: when two waves collide, they annihilate each other. This is, they do not travel past each other, nor do they positively interfere with each other, but instead cancel each other out. An example of this can be seen in the short image montage below.

Cortical excitability figure 2—a series of frames derived from cortical excitability movie 2 are shown below, along with a kymograph drawn from the red dashed line. Here two waves traveling in opposing directions are observed to anihilate each other, this can also be seen in the kymograph as two streaks traveling in opposing directions come together but do not travel past one another (red arrow).  Individual frames from this movie are also shown below as an image montage (traveling left to right). 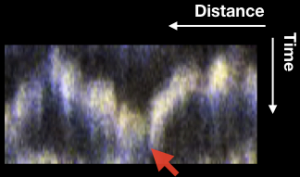 What controls the actin waves? Plausible candidates are the small GTPase Rho and Ect2, an activator of Rho that is required for cytokinesis (see Cytokinesis section). Indeed, inhibition of either Rho or Ect2 inhibits the waves. Moreover, modest overexpression of Ect2 results in a striking phenotype: high-amplitude waves of cortical Rho activity.

Cortical excitability movie 3—fluorescence, time-lapse movies showing a probe for active Rho either in a normal cell (below left) or in with overexpressed Ect2 (below right).

Cortical excitability movie 4—A fluorescence, time-lapse movie showing a probe for active Rho (in green) and actin filaments (in red). The kymograph is drawn from the dashed line.

Cortical excitability figure 3— a short image montage and corresponding kymographs showing two cells – cell 1 and cell 2 – in an embryonic epithelium.  These cells are double-labeled with a probe for active Rho (green) and F-actin (red). Kymographs are drawn across the length of the cleavage furrow in cells 1 and 2, illustrating the appearance of high amplitude rho waves, followed by F-actin waves, at furrow onset. 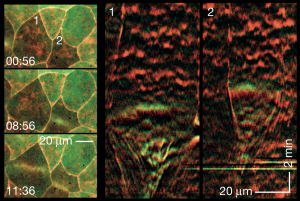 Remarkably, mild overexpresssion of Ect2 in starfish oocytes produces an identical effect: high amplitude rho waves followed closely by actin assembly. An example of this can be see below in cortical excitability movie 5. 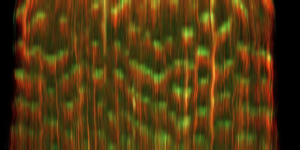 If Ect2 turns on the Rho waves, and Rho turns on the actin waves, then who turns off the Rho waves?  Because F-actin follows closely the wake of every Rho wave, and increases in intensity as Rho wave decrease, we hypothesized that F-actin could mediate the localization of a Rho inhibitor. To test this hypothesis, we exposed starfish embryos to low doses of Latrunculin B – an F-actin poison derived from acqatic sponges. By delivering the latrunculin through a glass micropipette, a steep concentration gradient of latrunculin can be formed. If F-actin normally mediates the deactivation of Rho, the predicted result is an increase in Rho activity in the period most affected by the Latrunculin B.

Cortical excitability movie 6—A fluorescence, time-lapse movie showing the effects of Latrunculin B exposure to a starfish oocyte expressing probes for active Rho (green) and actin filaments (in red).

Cortical excitability figure 4— a 3D kymograph rendering of the cell above. This cell is expressing probes for active Rho (green) and actin filaments (in red). The location of the micropipette delivering the Latrunculin B is depicted to the right of the cell. The kymograph shows an dramatic increase in Rho activity spreading along the expected concentration gradient of the drug. 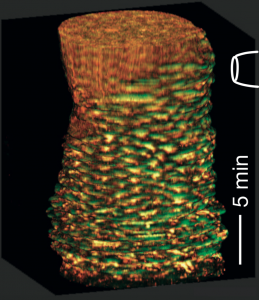 The rest of this webpage is currently under construction, please stay tuned!